As a midwife myself I know the importance of optimal cord clamping and was adamant that when I had my baby I was going to give, who eventually turned out to be a her, the best beginning!

I suffered horrifically with pelvic girdle pain since halfway through my second trimester which eventually led to me being signed off at work around 28 weeks.

By the time I was 37weeks pregnant I had well and truly had enough! I was in so much pain I could barely walk. It got so bad I was considering asking for an induction as I just didn’t feel I could carry on much longer and I’m not one to give up easily!

Thankfully at 37+5 I went into spontaneous labour (1 week after we moved house! Why do we do that to ourselves?!). Although I was technically under a consultant for a raised BMI, I was signed off as fit to birth on the birth centre. As a first time mum I had a fairly fast labour, about 5 hours from being deemed established, and hypnobirthed throughout in the pool. 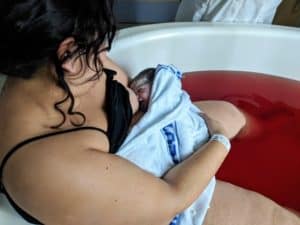 Due to my pelvic pain I could only get comfortable on my left side in the pool and remained like that pretty much the whole way through. I began to spontaneously push and knew that I was getting nowhere in this position so turned to all fours and she was born with the next 2 contractions.

I will never forget her face as I pulled her up to meet me through the water (in fact she still pulls it now when we dunk her under at swimming lessons!). We stayed, sat in the pool taking each other in till the cord stopped pulsating and had turned white. I don’t even know how long we stayed there for, those first minutes with your newborn are precious so we just wallowed in that oxytocin euphoria for what must have been around 15-20 minutes.

Had I have been on a high-risk labour ward I do not know if we would have had that amount of time to just sit and be undisturbed so I am incredibly grateful and thankful that I had a very positive birth experience and will definitely be opting for a home birth if there is ever a next time!